St. Joseph (Metuchen, NJ) offensive tackle John Olmstead is the #1 overall high school recruit in the state of New Jersey and just finished taking a visit to Rutgers last week before deciding Notre Dame would be where he plays his collegiate ball after his senior season in 2018.

What stood out about Notre Dame?

"Notre Dame, the tradition and the faith and everything to do with it, and just the history behind that football program and obviously they have great people there, too," said Olmstead to NJ.com.

"For me, it was a feeling thing. I'm sure you can ask any recruit when they commit. They just know. They get that feeling when they are on the campus."

Olmstead, the massive 6-foot-6, 303-pound four-star offensive tackle is the first offensive linemen recruit for the 2019 Notre Dame class.  Olmstead also represents the first player on the offensive side of the ball after QB Cade McNamara de committed and decided khakis were more comfortable than the blue and gold.

The athletic Olmstead chose Notre Dame over 35 other schools, some of the most prominent including Wisconsin, Penn State, Rutgers, Ohio State, Ole Miss, Michigan, Minnesota, LSU and FSU.

With Olmstead making his commitment public right before this Saturday's annual Blue-Gold spring game look for recruiting to pick up for Notre Dame with a plethora of other potential recruits ready to commit.  Some of those recruits names include another top 10 OT in Quinn Carroll (Edina, MN) who could line up next to Olmstead in the trenches.  Another name I've heard close to making his commitment public is safety Kyle Hamilton out of Atlanta (Marist HS) who is visiting UGA this weekend.

Olmstead is an exceptional athlete for his size. His biggest asset is his footwork and speed. He's a three-year starter for St. Joseph and probable captain.  He's projected to play tackle at Notre Dame once he adds a little more strength to his frame which is already collegiate ready.

Landing Olmstead is also a major coup for new ND offensive line coach Jeff Quinn.  Quinn's hire received considerable backlash among ND recruiting pundits because of a perceived weakness in his recruiting prowess.  But Quinn was able to recruit and keep Luke Jones in the fold after Harry Hiestand left for the Chicago Bears job and also flipped Jarrett Patterson on signing day from Arizona State.

Could we be looking at the next Mike McGlinchey at left tackle in Olmstead?  Only time will tell but it doesn't hurt Notre Dame to land a top 100 overall player in the nation who everybody wanted and who could potentially play himself up to a 5-star player in final evaluations.

You can check out John Olmstead's highlights if you are into those things at this link. 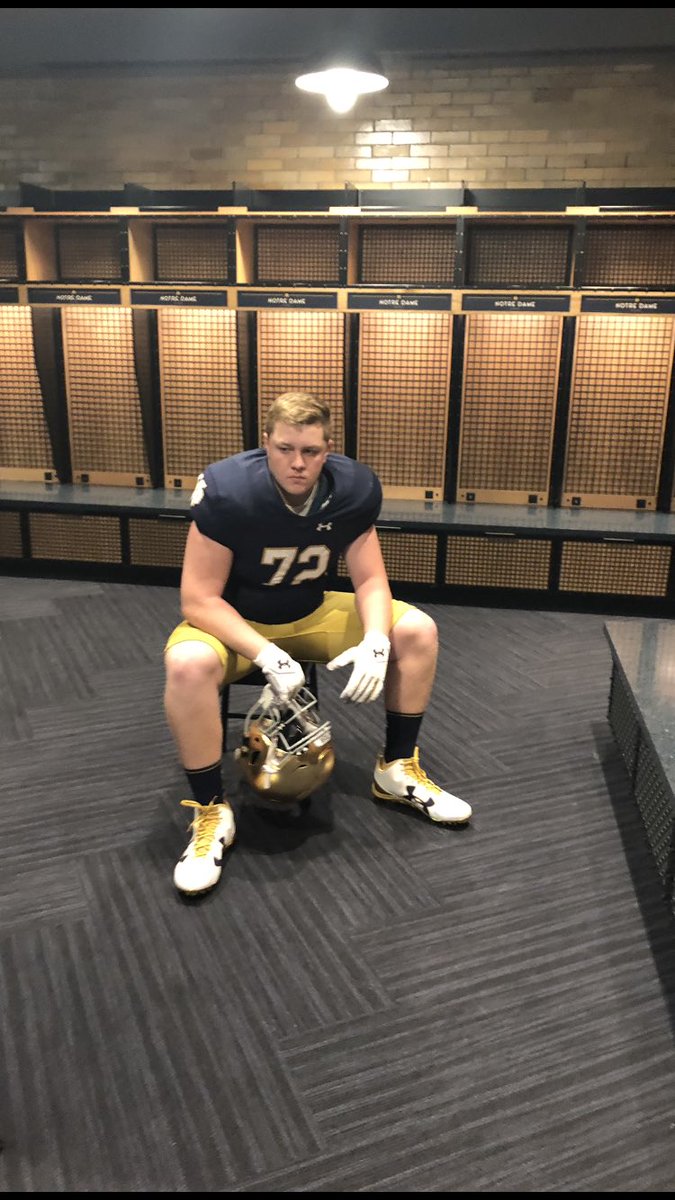