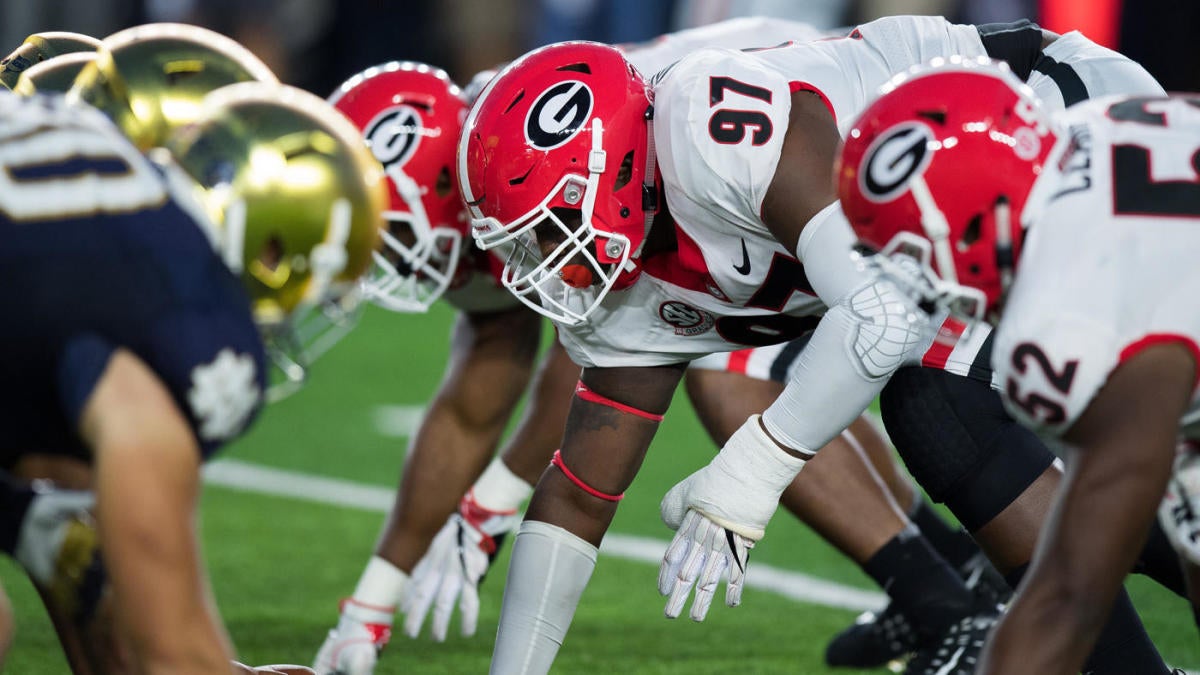 Hold your seats everybody we are officially less than one month away till college football kicks off.  One of the best things about college football starting is we get a ton of great non-conference battles early on in the season before conference play kicks in.

Here are the top 10 best non-conference games of the year which will help shape the College Football Playoff come December:

Not only is this the best non-conference game of the season but it's the best overall game of the year regardless of conference affiliation.  Both programs should be in the top 5, undefeated "under the lights" in Sanford Stadium.  There also could be some bad blood since a lot of Georgia players decided to Twitter trash talk when Clemson rolled over ND in the Cotton Bowl playoff game.  For some odd reason UGA thought they belonged in the playoffs over ND even with two losses on their resume.  UGA went on to play Texas in the Sugar Bowl and got ran over by Bevo pregame and by the Longhorns players throughout.  Both teams are legit playoff contenders again this season.  This is also only the 3rd matchup between the two teams with UGA winning a close one in 2017 in South Bend 20-19.  This game is also the hottest ticket on the market as it will mark the first time Notre Dame has played "between the hedges."  This game is so big that it was recently announced it would be played on CBS in prime time, under the lights, while bumping the traditional Alabama - LSU clash in November to a 3:30 start.  Not only are playoff implications on the line but possible Heisman Trophy contention could be decided as top 10 favorites Jake Fromm will battle it out with Ian Book.

Can we really say "Texas is back!" this year?  Yes.  Yes we can.  How many teams beat both Oklahoma and Georgia last season?  Only one.  Those fighting McConaugheys.  All right all right.  Texas has their Tim Tebow-like QB back in Sam Ehlinger and will face a fired up LSU squad looking to beat up on a team they share a border with but rarely face.  This game in just the 2nd week of the season will help determine if Texas is really back under Tom Herman and if LSU can contend to make a playoff this season.

Kudos goes out to Auburn for scheduling another PAC-12 team out of conference.  Last season they beat Washington, who went on to win the conference, in Atlanta opening weekend.  This year they face the Ducks, who some say can win the PAC 12 under Mario Cristobal, in Jerry World.  Oregon has their QB back for his senior season in Justin Herbert who will be looking to make a Heisman push opening weekend vs a good Auburn pass rush.  Auburn will be looking to make a national push under coach Gus Malzahn.  If Auburn loses this game Malzahn will be on the hot seat all year as they have road games at Texas A&M, Florida and LSU not to mention games vs Georgia and rival Bama too.  This is a must win for the Gus Bus.

The Aggies came the closest to beating Clemson last year as they went down to the wire in a thrilling game in College Station.  As we all know once freshman QB Trevor Lawrence was injected into the starting lineup shortly after no one stood  a chance as Clemson rolled to one of the best, if not-the-best, seasons in college football history 15-0.  Jimbo Fisher will be looking to build off a positive first season with the Aggies but is gonna have his hands full trying to stop Lawrence and WRU studs Justyn Ross and Tee Higgins not to mention RB Travis Etienne.  Right now this looks like it could be Clemson's toughest test of the season as they have to replace their entire defensive front.

The first official college football game of the season comes early vs two in-state teams that hate each other even though they don't face each other very often.  This will be Miami head coach Manny Diaz's first game at Da U as he is looking to bring the swag back to South Beach which apparently left a long time ago.  He's gonna have his hands full as of now they still haven't got a starting QB named.  Florida will be looking to build off a solid 10-win season under coach Dan Mullen in year 1 which included a blowout of Michigan in the bowl game.  This game August 24th in Orlando is gonna be so hot and disgusting that it should probably be rated NC-17 as clearly the viewing is not intended for minors.  As a college football fan I fucking love it.

Catholics vs Khakis is back!  For the first time that I can recall this game between the two bitter rivals will not come in early September, instead it's in late October.  The Khakis will be looking for revenge as Harbaugh's Michigan team got pushed around last year in South Bend.  This year for some strange reason Michigan is again ranked by many pundits to be a top 5 program and will be looking to make a statement vs Brian Kelly's potential top 5 squad.  ND will be coming off battles vs UGA and USC but they have a bye week heading into Ann Arbor which should help returning QB Ian Book prepare against a revamped Wolverines defense that got scorched by Ohio State and Florida to end the season.  Both programs could be in playoff contention come kickoff but whomever loses will most certainly have those playoff aspirations dick punched.

Order the classic "Ann Arbor is a Whore" Shirt Here The "back-to-back undefeated National Champs" UCF saw their 25-game winning streak end last season in the Fiesta Bowl vs LSU and will be looking to make a statement vs the might conifers of Stanford.  This is a huge game for both programs as Stanford will be looking to rebound after a disappointing 2018 season with senior QB K.J. Costello back.  UCF will be looking to start a new winning streak under ND transfer QB Brandon Wimbush behind center.  I'm not sure how much playoff implications are on the line here but we know for sure who ever loses will not be in it.  For the UCF haters out there that could be music to their ears.

Dana Holgorsen makes his Houston debut against powerhouse Oklahoma in Norman.  Holgorsen will look to put a ton of points on the board with senior QB D'Eriq King who accounted for 51 TDS last season.  Oklahoma not to be outdone will debut Alabama transfer QB Jalen Hurts who will be looking to keep the Heisman Trophy transfer winning streak going under QB whisperer Lincoln Riley.  If you like shootouts this could be the most entertaining game of the season in week 1.

We all know Willie Taggart had an "interesting" first year in Tallahassee which saw the Seminoles winning record and bowl streak come to an end last year.  Taggart will be looking to get off to a good start vs an underrated Boise State team who remains one of the top non Power 5 teams in the country.  If Taggart loses this game basically at home even though it's in Jacksonville the tomahawk chop could quickly become pink slip chops for himself and the AD.

Frost is coming early to Boulder!  Scott Frost will be looking to build off a positive 2nd half of his 1st season in Lincoln with a road win at Colorado.  The former Big Eight rivals played last season in a game that went down to the wire 33-28 in favor of the Buffaloes.  Nebraska QB Adrian Martinez returns and brings a dynamic punch for the Cornhuskers offense.  While it's just year 2 this game could be used as a major statement for Frost and company especially when it comes to recruiting on the national stage.  But let's be honest there are no playoff implications in this game.

Army at Michigan, Sept. 7: ﻿ESPN currently has this game as Michigan with a 95.5% chance of winning at home.  I'm not so sure about that.  I think Army could pull the upset especially coming off a 10-2 season in which one of the losses was in overtime to Oklahoma.

Oklahoma at UCLA, Sept. 14: Chip Kelly's offense vs Lincoln Riley's offense should be entertaining for the first quarter till Oklahoma torches them in the Rose Bowl.

Pitt at Penn State, Sept. 14: The old "EAT SHIT PITT" rivalry game between two in-state programs should be entertaining even with both programs looking at rebuilding years.

CBS makes it official: Notre Dame vs Georgia football game will be under the lights in primetime September 21st

We’re going under the lights in Athens. ⁰

CBS Network made it official today what we already basically knew.  The September 21st match up between the Notre Dame Fighting Irish and the Georgia Bulldogs will be in prime time at 8 pm EST on CBS.

This will be the first ever trip for Notre Dame to Athens to play in Sanford Stadium.  It's obviously gonna be big ticket game with a potential match up of two top 5 teams at kickoff.

In order to make this is a prime time game CBS had to decide not to air it's annual Alabama vs LSU game in early November at night and will instead be a traditional 3:30 kickoff.  This will be the first time since 2010 the game between the two SEC West rivals isn't under the lights.

One can only imagine how loud and ruckus the game day atmosphere in Athens is going to be for this college football powerhouse matchup by the time kickoff hits.  You have a team in Notre Dame coming off their first ever playoff appearance and undefeated regular season visiting "between the hedges" for the first time vs a Georgia team who were a couple of plays away from beating Alabama last season in the SEC Championship.  Both programs have veteran offensive lines to protect their quarterbacks in Ian Book and Jake Fromm whom both will be looking to make an early Heisman statement.

Domers vs Dawgs.  See you there!