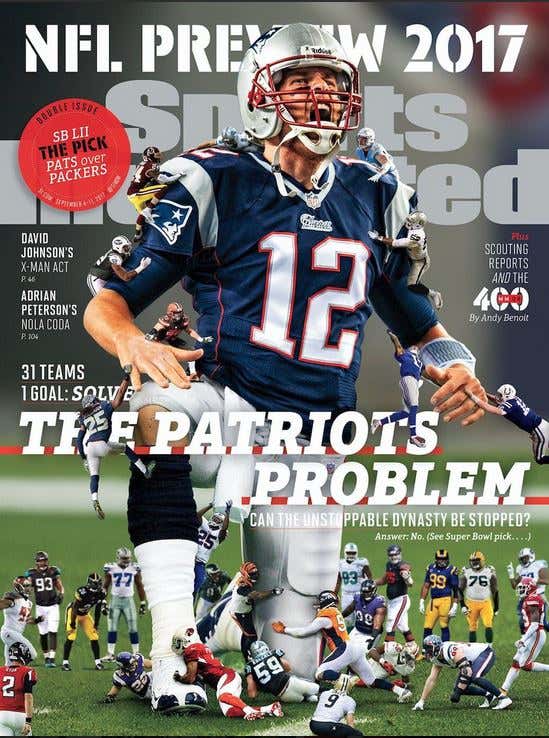 I don't even know why I let myself get bothered by this but I don't think I'm ever going to get over the utter devastation of what exactly happened in Super Bowl 51.  I can't be pissed off at the New England Patriots and Tom Brady and Bill Bilechick.  I just can't.  But that headline "Can the unstoppable dynasty be stopped?" shouldn't even be a headline.

The Atlanta Falcons choked it away.  It's as simple as that.  It wasn't like the Patriots won that game as much as Kyle Shanahan, Dan Quinn, and the Falcons offensive line all worked together in reverse unison and handed them the fucking Lombardi Trophy on a silver platter.

When Julio Jones made that impossible catch possible it should have cemented Matt Ryan, the city of Atlanta, the Falcons organization and all their fans as the ultimate winners.  The Lombardi Trophy should be resting it's ass in the ATL for years to come.  There should have been parades and babies made that night with the names of Ryan, Jones and Devonta.

All the hot takes on ESPN should be if Matty Ice the reigning NFL MVP is the face of Atlanta on the Mount Rushmore of sports heroes.  Could Julio be the best NFL WR since Randy Moss?  Could Dan Quinn and Arthur Blank be building a team to take over the Patriots as the next NFL dynasty?  But instead here we are with Sports Illustrated's cute little cover of NFL players trying to tackle the might giant Tom Brady because the Falcons decided to get cute instead of RUNNING THE FUCKING BALL.  Thanks Shanahan and Quinn.

I've tried to hide the pain of the biggest choke job in professional sports history by ignoring it these past 6 months but now it's time to move on.  It's time for the Falcons to get what is theirs.  The new Mercedes Benz Stadium is now the crown jewel of NFL stadiums and will be home to the best team in the NFL this year in the Atlanta Falcons.  Yes I said it and it's the first time I've ever even thought it in my 38 years.  The Falcons are the best team and should be the favorite to win the Super Bowl this year.  The defense is going to be crazy fast with the return of guys like Desmond Trufant and the additions of players like Dontari Poe and Takk McKinley.  If Cutty Sark can avoid the bottle the offense should once again be top 3 at worst in the NFL.  It's gonna be a fun season.

Enjoy it now Patriots fans.  The bandwagon is mighty full with 40-year-old Tom Brady and the great hoody coach.  Your reign is over.  The Falcons take flight and rise up as the NFL's next dynasty starting this year.  They will get back what is rightfully theirs.  The Patriot's problem will be the Falcons and hopefully we see a rematch in Minneapolis next February.  You may deflate your footballs but you can't deflate the brotherhood.