This is why I will never, ever get hypnotized. While it's hilarious to watch the Texas Longhorns football players driving in their sleep could you imagine the fucked up shit you would do if some demented person hypnotized you. It's like those people who fall for cults and wind up drinking the kool-aid. Don't do it! Come to think of it there was a lady going around neighborhoods and ringing doorbells at 4 am asking for water last week. True story. She didn't appear to be drunk or drugged and talked normal from the footage picked up by Ring doorbells. She had to have been hypnotized. She's lucky nobody shot here. Don't get hypnotized...ever.
Read more →
0 comments
Tags: hypnotized, texas longhorns 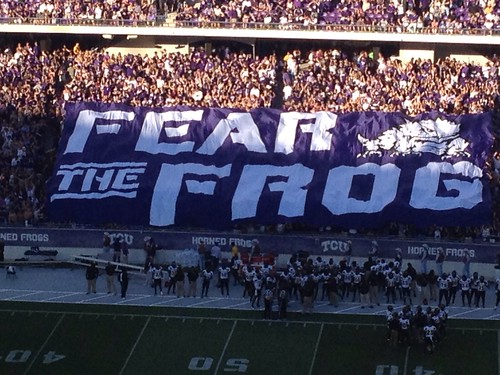 1. TCU (10-2) - Horned and Dangerous.  Last season the Horned Frogs won 11 games and would have easily won the Big 12 if not for Trevone Boykin getting injured. They also lost a ton of players due to injuries but it helped build the depth for this season.  I see their defense stepping up big time and new QB transfer Kenny Hill being effective while leading the Horned Frogs to the outright Big 12 title.

2. Oklahoma (9-3) - Sooners have high expectations coming off a playoff loss to Clemson.  Heisman contender Baker Mayfield is back and should lead a potent Sooners offense.  The Sooners got a ton of breaks last year including a last second win vs Tennessee and a one point win over TCU.  The law of averages catches up with them this year and they lose some heartbreakers to Houston, Ohio State and TCU before recovering in October.

3. Oklahoma State (8-4) -  The Cowboys jumped to 10-0 last year before dropping their final 3.  The same could be said this year as the schedule sets up favorably going into late November.  QB Mason Rudolph is back along with his favorite target WR James Washington.  The offense should click all season but their defense will again be their achilles.

4. Texas (8-4) - It's kind of sad to think this is an optimistic prediction for Longhorns football but here we are as Charlie Strong enters his third season in Austin after 6-7 and 5-7 seasons.  It looks like Texas is going to go with the true freshman Shane Buechele who from all reports has been outstanding.  If Texas can pound the rock and play some good defense (watch out for LB Malik Jefferson) they could win 10 games. 5. Texas Tech (8-4) - QB Patrick Mahomes is going to put up Heisman worthy numbers in Kliff Kingsbury's system.  The problem is the Red Raiders have no defense.  I see a lot of 40-60 point shootouts in Lubbock this fall.

6. Baylor (7-5) - Art Briles is gone.  He's the best coach by far in Baylor history.  The team lost a ton of starters on both lines of the football.  QB Seth Russell is back from injury but this is going to be a tough season for Baylor after a tumultuous offseason of sexual misappropriation.

7. West Virginia (7-5) - Head coach Dana Holgorsen has his work cut out for him as he tries to find a way to replace some talented defensive players on the back end.  Team captain QB Skyler Howard is back and the Mountaineers return most of their offensive playmakers.

8. Kansas State (6-6) - Bill Snyder is still coaching this team, his 25th in Manhattan.  The Wildcats were dealt some awful blows with multiple QB injuries where they were forced to convert WR Kody Cook to behind center to finish the season.  This year QB Jesse Ertz returns and should help the timing with the offense.

9. Iowa State  (4-8) - First year coach Matt Campbell comes from Toledo where he led the Rockets to 4 straight winning seasons.  He's got his work cut out for him as the Cyclones have only won a combined 8 games the last 3 seasons.  The key is to get the ball into WR Allen Lazard's hands.  Kid is special.

10. Kansas (2-10) - There is nowhere but up after Charlie Weis torpedoed the Jayhawks into Big 12 oblivion and first year coach David Beaty went 0-12 last season.  Their 5 year record is 9-51.  Wow.  Did I mention how much Weis shit on this program?  Kind of reminds me of what Ty Willingham did to Washington after he got fired from Notre Dame.  Hmm.

OVERRATED TEAM - Oklahoma is top 5 in most preseason polls and it doesn't usually bode well in scoreboard results for Bob Stoops teams.  I see them losing 3 early games.

UNDERRATED TEAM - I got TCU winning the conference despite being picked middle of the pack by most experts.  The talent and the coaching is there and they are coming off 12 and 11-win seasons.

BEST DEFENSIVE PLAYMAKER - Sophomore LB Malik Jefferson is an animal.  Texas should take off the chain and let him wreak havoc this fall.

COACH OF THE YEAR - TCU coach Gary Patterson will again get the Horned Frogs back into playoff contention.  No wonder they have a statue of him outside their stadium.