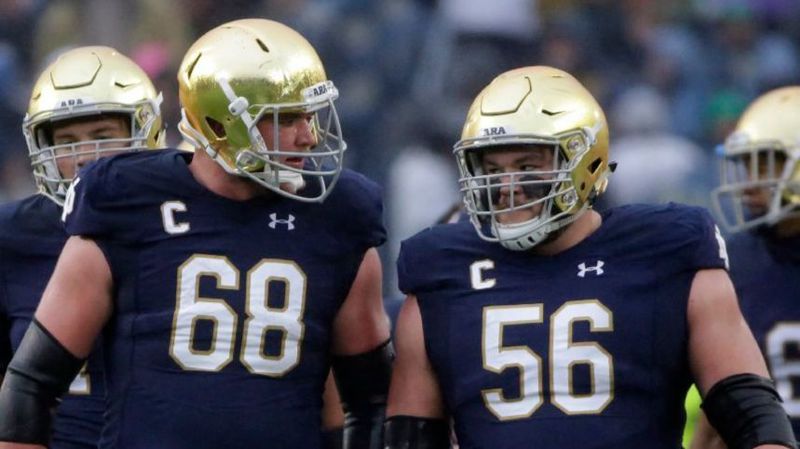 The 150th anniversary of College football is coming up this season.  Hard to believe but Brian Kelly will be entering his 10th season at Notre Dame.  The only other head coaches who have lasted a decade under the bright lights of the Golden Dome are legends Knute Rockne, Frank Leahy, Ara Parseghian, and Lou Holtz.  Those 4 all had a National Title/titles under their belts though by the time they reached double digits in the coaching seasons department.  They also all have statues outside of Notre Dame Stadium.

Of course the landscape of college football has changed dramatically and if it weren't for powerhouses Alabama and Clemson standing in his way Brian Kelly could have a couple of Nattys himself.

Kelly has had many great players battle for him in the blue and gold.  I couldn't wait until the end of the 2019 season to come up with my Notre Dame football team of the decade for this article though.  Unfortunately some guys who will have tremendous seasons this year won't be included on this list because I can't predict the future.  My bookie is grateful while my wallet is not.

Left Tackle: Ronnie Stanley - Started 3 seasons including his sophomore season (2013) in which the line only gave up 8 sacks all season.  Drafted 6th overall by the Ravens in 2016 after a consensus All-American season in 2015.

Left Guard: Quenton Nelson - The best college guard I've ever seen play.  Big Q earned unanimous All-American honors in 2017.  Drafted by the Colts 6th overall he was a 1st team All-Pro as a rookie in 2018.  This block alone vs Georgia makes him a legend...


Center: Nick Martin - A 3-year starter and team captain that was part of the 2013 line which only gave up 8 sacks all season.  Drafted in the 2nd round by the Texans he was a big part of ND rushing for over 200 yards per game in 2015 which was the highest since 1998.

Right Guard: Zack Martin - A 4-year starter and team captain at right tackle and left tackle at Notre Dame.  I put Nick's older brother at guard here because he has earned 1st team All-Pro honors with the Dallas Cowboys three times including all 5 seasons making the Pro Bowl since he was drafted in the 1st round.

Right Tackle: Mike McGlinchey - A 3-year starter and team captain who earned consensus All-American honors in 2017 while teaming up with Quenton Nelson on a devastating left side of the line.  The 9th overall pick to the 49ers earned All-Rookie honors in 2018.

Quarterback: Ian Book - While he's only started 10 games for Notre Dame he's got a 9-1 record.  Book was instrumental in a victory over LSU in the Music City Bowl coming in for an erratic Brandon Wimbush and leading the Fighting Irish to a come-from-behind victory in 2017.  Last season he set a ND record by completing 68.2% of his passes while leading ND to an undefeated regular season.  Expected to be named a team captain in 2019 Book will be looking to get Notre Dame back into the playoffs. Running Back: Josh Adams - Set a Notre Dame freshman record with 835 yards rushing in 2015.  A 3-year starter at Notre Dame he finished with 3201 rushing yards and probably would have broken Autry Denson's school record if he decided to return for his senior season.

Tight end: Tyler Eifert - The Mackey Award winner and 1st Team All American broke the school's tight end single-season receptions and receiving yards record on his way to being a 1st round draft pick by the Bengals.

Will Fuller - Big play Will caught 29 TDS during his two years starting at Notre Dame including tying a school record of 15 (Golden Tate) his sophomore season.  Ranks top 5 in ND history with catches (144), yards receiving (2512) and TD catches (30).  He was drafted 21st overall by the Houston Texans.

DT: Sheldon Day - Day's 4-year career included an outstanding 32 tackles for loss.  As a captain in 2015 he was named 2nd team All-American and helped tutor a young "Terry Jillery."

DT: Jerry Tillery - Speaking of Tillery the 6'7 noseguard used his size, length and strength to rack up 23 tackles for loss in his career despite constant double teams.  After recording 7 sacks his All-American senior season he was selected in the first round by the Chargers.  It marked the first time in over two decades a ND defensive linemen was selected in the 1st round.

DE: Julian Okwara - My #1 player returning to Notre Dame last season led the Fighting Irish with 8 sacks, 21 QB pressures, and 12.5 tackles for loss last season.  The future 1st round pick has set a personal goal of 20 sacks his senior season.  I wouldn't bet against it.

Jaylon Smith - Jaylon was the best sideline-to-sideline linebacker Notre Dame has ever had and if not for a serious knee injury vs Ohio State in the Fiesta Bowl would have been a top 5 NFL pick. The Butkus Award winner and consensus All-American (2015) finished his career with 24.5 tackles for loss.

Drue Tranquill - The two-time ND Captain persevered through numerous injuries including an ACL tear and a broken hand to help lead Notre Dame to an undefeated regular season in 2018.

Manti Te'o - The most decorated player in Notre Dame football history just finished short of winning the Heisman Trophy his senior season in which he helped lead Notre Dame to their first undefeated regular season since 1988 in 2012.  The Hawaiian Hitman was a leader on and off the field and set a ND LB record with 7 INTS in 2012.

Julian Love - ﻿The consensus All-American set a Notre Dame career and season record for passes defended on his way to being a 3-year starter and leader of a secondary which helped propel ND to an undefeated regular season in 2018.

Robert Blanton - Blanton is the best tackler I've ever seen play cornerback for ND and it was evidenced by his 15.5 tackles for loss during his junior and senior season.  Blanton was Mr. Consistency at ND with 2 INTS all 4 years.

Free Safety: Harrison Smith - The converted linebacker had a monster junior season with 7 INTS and followed it up as a senior captain with 90 tackles including 10 passes defended.  The 1st round selection by the Minnesota Vikings in 2012 has gone on to a career of multiple All-Pro seasons and is highly regarded as one of the best safeties in the game. Strong Safety: Alohi Gilman - Admiral Crunch as I call him has only one year under his belt as a starter at Notre Dame after transferring from the Naval Academy but he's already become a legend after helping lead ND's defense last season.  Gilman is a preseason All-American, Jim Thorpe watch list member, and is expected to team up with Jalen Elliott as one of the best safety duos in college football.

Kicker: Justin Yoon - The Yoonabomber finished his ND career as the all-time leading points scored with more than 300 in his career.  While Yoon didn't have the biggest of legs he was exceptionally consistent even in adverse weather conditions converting over 80% of his field goal attempts.

Punter: Tyler Newsome - The eccentric Newsome with his mohawk mullet averaged over 44 yards a punt during his 4 years at Notre Dame.  A senior captain he will be missed in the locker room.

Kick returner: George Atkinson III - There's not much to write home about when it comes to kick returns in the Brian Kelly era.  GA3 had two kickoff returns to the house his freshman season but after that was relatively quiet.

Punt returner: CJ Sanders - "Little Ray" had 3 returns for TD his first two seasons only to play little his junior season before transferring his senior season.