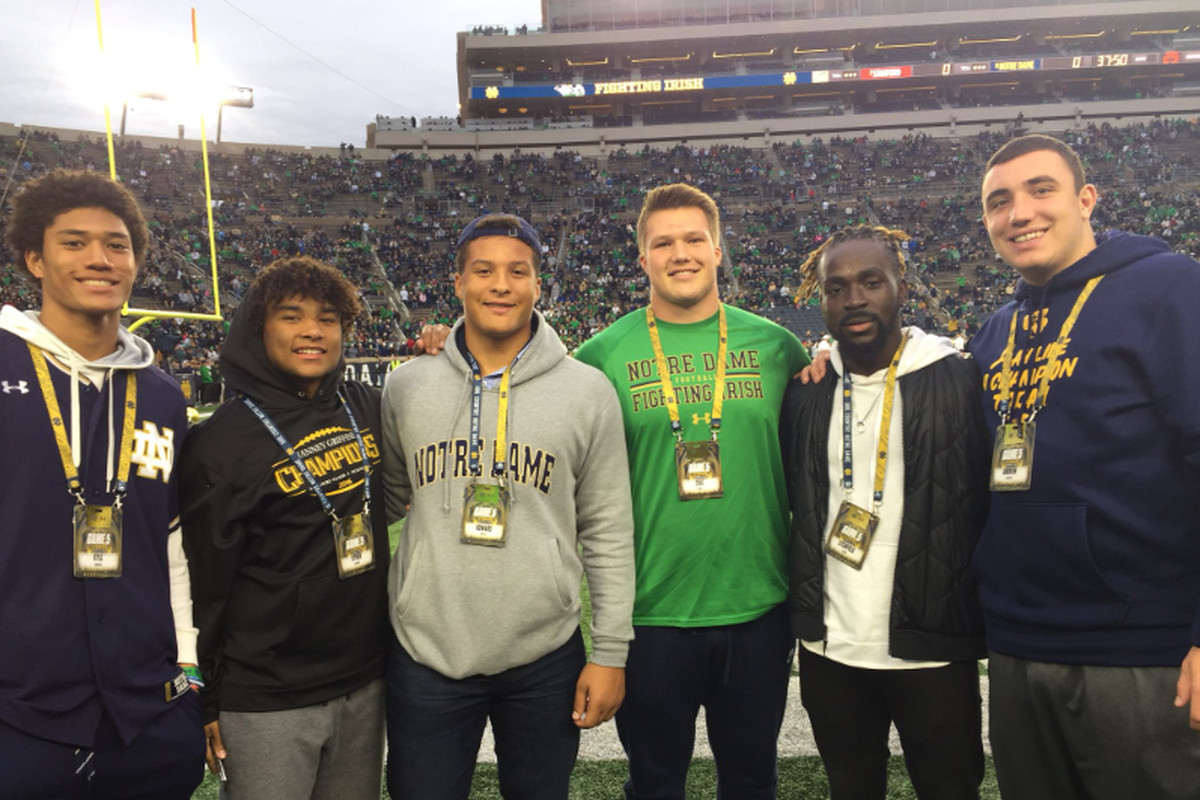 The last two years of the college football playoffs have shown the world multiple freshmen can make an immediate impact even on top tier teams loaded with talented upperclassmen.

Last year we saw Clemson's freshmen Trevor Lawrence and Justyn Ross shred Notre Dame and Alabama defenses on their way to an undefeated National Title.  The year before we saw a championship game that featured two freshmen quarterbacks in Jake Fromm and Tua Tagovailoa battle it out not to mention other standouts like D'Andre Swift, Jerry Jeudy, Devonta Smith and others play significant roles.

So now the question remains can Notre Dame find themselves an instant impact freshmen that can help get them over the proverbial tier 2 maybe 3 hump they are in right now?  If they want to start beating the Clemsons, Alabamas and this year Georgias of the world it might in fact come down to a freshmen making a deciding play.

Last season only 3 freshmen played meaningful snaps for a veteran Fighting Irish squad.  Houston Griffith, Jayson Ademilola and Tariq Bracy all made impacts on defense.  Unfortunately as with the case with most Brian Kelly teams the freshmen were not counted on to make an impact on the offensive side of the ball once WR Kevin Austin got in BK/OC Chip Long's doghouse.

Let's take a look at 5 Notre Dame freshmen who could make an impact this fall.

It's not a sexy pick by any means but the Tuscaloosa, AL freshman, who enrolled in the spring to take over the punting duties for four-year starter Tyler Newsome, is the only freshman currently set to start this fall.  Bramblett, hopefully for ND's sake, won't be counted on to punt too much this season with a veteran offensive line returning to protect QB Ian Book who has plenty of offensive weapons to choose from.  When he does punt though it's Bramblett or bust for the Irish.  In other words "don't F it up" kid. 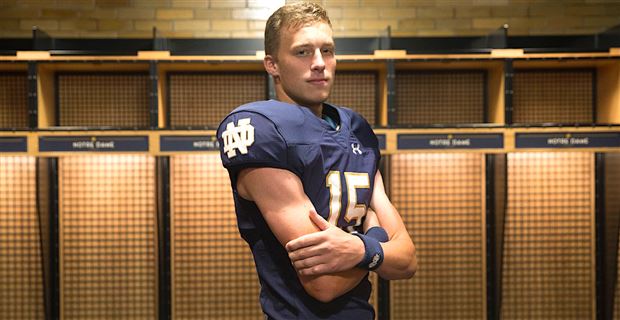 Lacey is another early enrollee who will be backing up starter Kurt Hinish this season.  The 6'2, just a shade under 300 pound interior defensive linemen will be working in a four man rotation along with starters Hinish and Myron Tagovailoa-Amosa and backup Jayson Ademilola.  Lacey should see significant playing time his freshmen season to keep the starters fresh.  Personally I think Lacey will be effective enough that it will allow the Irish to redshirt sophomore Ja'mion Franklin this season who's still rehabbing his serious quad injury. 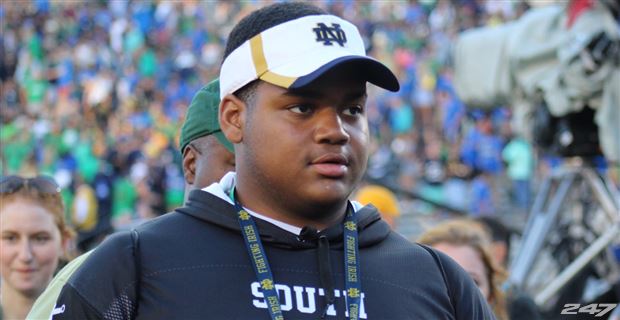 The Atlanta, GA native is the only "5-star player" in the 2019 class.  Safety isn't a position where freshmen usually are counted on to make positive impacts.  But Hamilton is a different cat.  He reminds me so much of Bobby Taylor.  Smart, tall, incredible length, instinctive and a guy who always seems to be around the ball are just a few of the traits Hamilton shares with Taylor.  With seniors Alohi Gilman and Jalen Elliott back starting it will be hard if not impossible for Hamilton to start this season barring injury but he should get plenty of defensive reps.  You don't "redshirt" a talent like Hamilton even if he needs to make some gains in the weight room.  Strength and conditioning coach Matt Balis will see to it's no obstacle for Hamilton this fall. 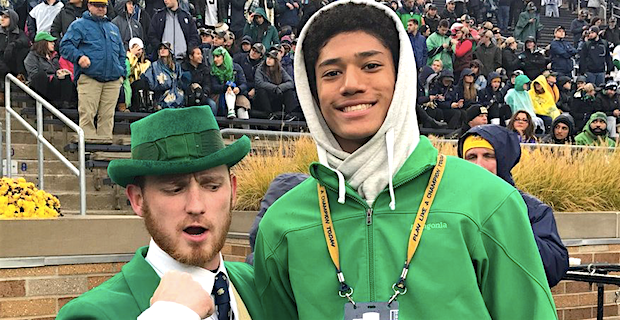 Foskey was the last and only recruit to sign in his class after Signing Day last year.  The 4-star De La Salle (CA) product spent his senior season splitting time between defensive end and tight end.  Foskey will be solely a drop end for the Fighting Irish.  The 6'5, 250 pound already has the size, arm length, and build you look for in an elite college football defensive end.  Notre Dame has the luxury of already having one of the nation's best - if not the best - group of defensive ends in the country this season with Julian Okwara, Khalid Kareem, Ade Ogundeji and Daelin Hayes among others returning.  Playing time maybe limited for Foskey.  But I can see DC Clark Lea and defensive line coach Mike Elston finding ways to get Foskey some serious PT in order to not only develop the fast twitch rush edger but to give their veterans some rest.  Foskey may have been the last signee in the class but he should be the first off the bus when it comes to intimidation and overall mass of a player. 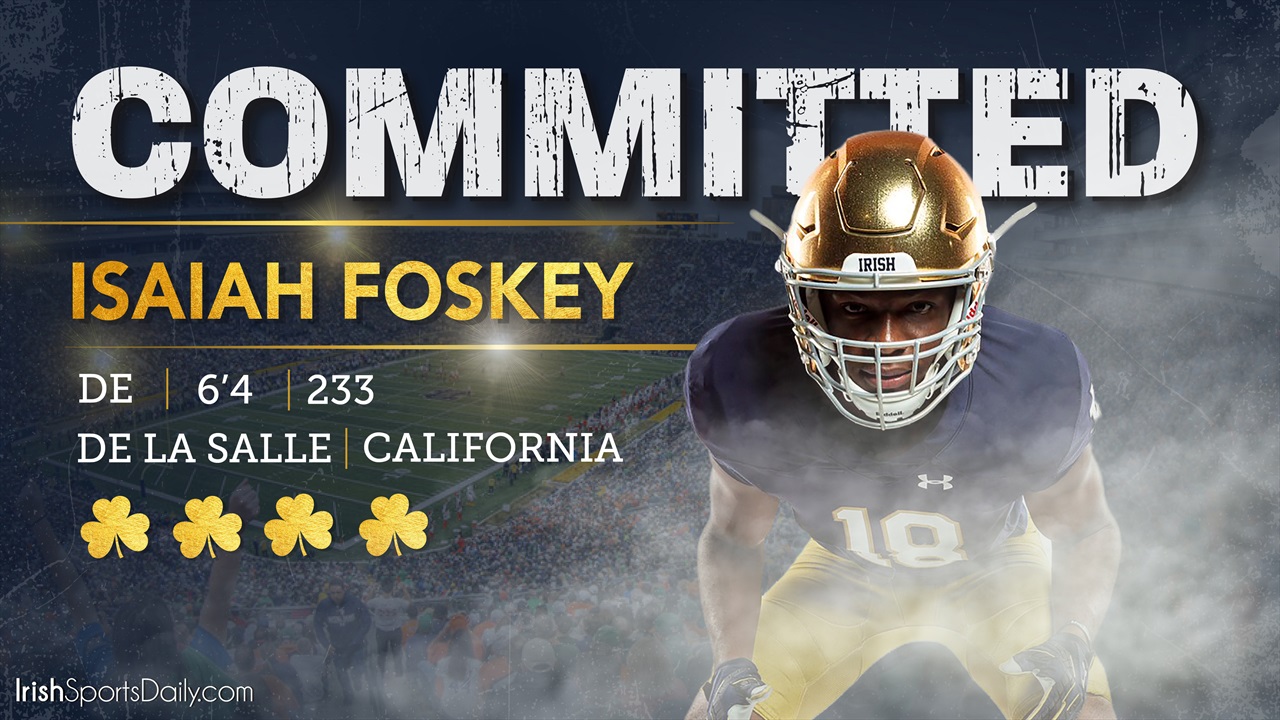 While Kyren was only rated a 3-star player coming out of St. Louis you could tell, at least in the ND Blue Gold Spring game, that he was ready to take on the rigors of a college back workload.  His massive legs looked more like trunks than limbs and his lower body was built to at the very least get some looks in goal line situations.  Kyren will have to wait his turn behind starters Jafar Armstrong and Tony Jones Jr not to mention freshmen C'Bo Flemister and Jahmir Smith but the early enrollee showed this spring that he can catch the ball out of the backfield and can put his helmet down and score those tough TDs inside the red zone.  If one of the starters struggles or an injury happens don't be surprised to see Kyren get some meaningful playing time this season.